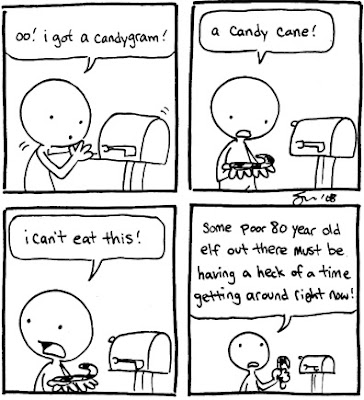 Hahah! Poor old elf. :P
Anyway. More Twilight rants! Haha.
Actually I'm kinda lazy. It was a bad show.
Watch it.. To laugh at it.
And groan at all the bad special effects. They SUCK.
When James the tracker did this deep sniff thing, I burst out laughing in the cinema.
It was so funny! His face.
-gasp-
Oh, and Edward does this thing where he STARES at Bella all the time (I think it's supposed to be romantic, it's really not.) and when he STARES at Bella, his eyes BUG out, and then its as if he's saying :
I'm going to STARE you to death, Bella, I am going to STARE you to death. To DEATH.
Yeah. It's weird.
Ew.
Kay, I'm going to go.
Posted by Kateh at 1:22 AM